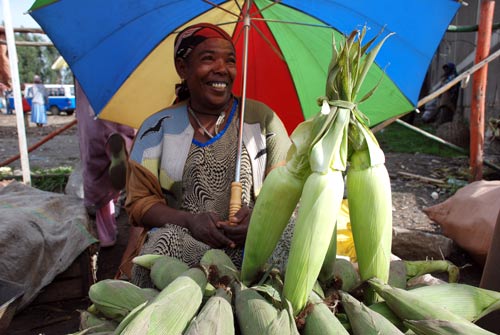 Ethiopia is the third largest producer of maize in Africa, following South Africa and Nigeria (FAOSTAT, 2015). In Ethiopia, Maize is produced in an area of 2 million hectare of land with annual total production of about 6.5 million tons only during the main cropping season alone. Maize productivity during the same year was 3.25 t/ha (CSA, 2013/2014).

Taking Maize Agronomy to Scale in Africa (TAMASA), was developed with the main objective of narrowing the maize yield gaps through developing and scaling out decision support tools that helps appropriate site specific variety and nutrient recommendations based on geo-referenced crop and soil databases collected during the project lifespan in Ethiopia, Nigeria and Tanzania. These tools are Nutrient Expert tool, which determines the appropriate amount and kind of nutrients for specific farm and Variety tool, that identify the suitable variety for a given geo-referenced locations. These tools help the farmers to make more precise fertilizer and variety recommendation and ultimately contribute to narrowing the maize yield gap and hence improves maize production and productivity in Ethiopia.

TAMASA is primarily being implemented by CIMMYT Ethiopia as a host and Ethiopian Agricultural Research Institute (EIAR) as implementing partner.

In addition, other organizations – including Ethiopia’s Agricultural Transformation Agency (ATA), World Vision Ethiopia, GIZ and MoANR – are associate partners who will promote the use of different tools to be developed by the project. Service providers such as development agents (DAs) and district level agricultural experts, who are engaged in agricultural extension services, are also partners as they are in close contact with the end users (farmers). Currently, DAs are involved in managing 2-4 calibration and validation experiments established in their respective kebele (peasant association).

In Ethiopia regional fertilizer recommendations are being widely used. Yet inherent soil fertility status as well as soil fertility management practice varies from village to village and from farmer to farmer.

Check out our Newsletters

Stay up to date on TAMASA